This Christmas the family and I gave in to my brothers torment of a PS4. He began the nag 2-3 months ago. But when the day finally came and the presents were to be revealed he still couldn’t believe it, when he was given the money for the Playstation. His hands were shaking of disbelief and amazement. The first day the shops opened after Christmas, we actually went to buy it. Each moment of the day was eternalised by my brother on pictures and now, I actually haven’t heard from him in a while… #Nowthatisgiftgiving, #HisHandsWasShakingOfExcitement, #FunniestGiftGivingEver, #OhHowILoveChristmas. 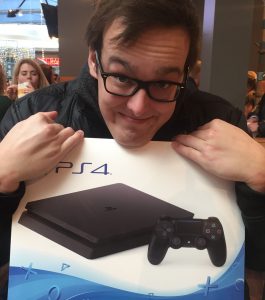 Btw, the fact that my brother now is the overjoyed owner of a PS4, suddenly made me the owner of a PS3. Not that I need it, but it will make me play dvd’s and such. #IAmNotTheGamerType, #MaybeIWillBe, #SecondHandGamer…

01.01.17, 01.00 AM: That thing about cancelling New Years 2016 was a huge success. Don’t get me wrong. I love to celebrate this day with my friends too. But what a night! I LOVED IT! And just going out to watch other people’s money being shut in many colours over the midnight sky is actually really cool. And now I am enjoying Cava and watching Cirkus Revyen 2016. #YupIAmThatKindOfGal, #HappyNewYear.

Speaking about New Years I kind of find that this is that one day a year no one complains about traffic, because no one sticks to the rules. One day of chaos and lawlessness. I mean it’s not just traffic. It’s a miracle that more people are not hurt or killed on this day. #DrunkPeopleAndFireworks, #DangerousBiking.

Turning 30 wasn’t as bad as I had feared. Until my mum suddenly stated that, “Now, I was a lady”. Fears of becoming old and grey rushed over me as I firmly responded that, I was not a lady. Lady in Danish (dame) is in my view a title one gets when waaaaaay older than 30. maybe 60 or even 70. #IAmNOTThatOld, #MyMotherCouldNotStopLaughing, #ButThenWeAteCake.